Beep, Beep, Beep. The alarm awakens us, signaling another work day. Mike slowly swings his legs off the bed and starts a slow shuffle towards the closet. After ten minutes when he hadn’t even reached the foot of the bed, I gently chided “I said you wouldn’t be going to work today.” He had been playing basketball the day before when the ball went outside the fence. Jumping the fence to retrieve the ball, he landed on uneven ground and his back seized up. I had warned him it was only going to get worse. My childhood was spent watching my dad throw his back out more times than I can count. Mike blew off my warnings, claiming he would be fine. Sadly, my prediction was correct. Mike sighed, admitting defeat, and called in sick.

On the Streets of Philadelphia

To add extra stress to the thrown out back scenario, we were both signed up for the Rock and Roll Philadelphia half marathon. The race was exactly 3 weeks from the day Mike’s back went out of commission. We planned to stay with his sister who lives outside Philly, and our flights were already purchased. I knew immediately Mike would not be running, and as time ticked by without vast improvement, he also accepted that reality. The question was, could he travel? This was my first time meeting his sister and her family, so going alone was out of the question. His sister and brother-in-law had signed up to run with us, and we had tickets to a Father John Misty concert as well. Mike loves music more than running, so we try to fit a concert in our race-cations when possible. We were hesitant to cancel, so we decided to play the “wait-and-see” game.

Thankfully, after two weeks of being couch and bed bound, Mike was walking, albeit slowly and not pain free. Running was still out of the question, but he was at least going to be able to travel. Our flight was through Frontier as they offer a direct, cheap flight from Charlotte to Philly. However, as anyone who has flown Frontier knows, their seats offer zero cushioning. I believe they currently hold the patent on “negative cushion seating”. This typically isn’t a problem for us and we suck it up for the cash savings, but it isn’t ideal for one with back pain. Mike tried his best to not show his agony, but I could see the discomfort on his face. At least it was only a very short flight.

Mike’s sister picked us up from the airport and we went straight to downtown Philly for packet pickup. Mike was actually happy to be standing and walking after an hour on the plywood board Frontier seats. Like most Rock and Roll packet pickups, it was in the large convention center, and was well organized. Gathering the necessary items was quick and smooth, and there were tons of vendors to peruse. We even got a coupon for a free box of Uncle Ben’s Rice from one table. An unusual but appreciated surprise.

After packet pickup we went to Mike’s sister’s house and relaxed a bit while I got to meet his nephew and niece. That night we attended the Father John Misty concert at the Mann Center, which is a breathtaking outside amphitheater with an amazing view of Philly at night. The next day we explored an amazing, hard to describe shopping mall with a mix of antiques, new items, and an area where the Amish could sell homemade food and items. We picked up Amish homemade pasta noodles and other items for dinner, and explored the eclectic mall. The adults decided to go out for a drink before cooking dinner, so they took us to a nearby restaurant with a fancy bar. The bartender was confused by our NC driver’s licenses. At first refused to serve us, claiming she had never seen a NC license before and couldn’t verify if they were real. Mind you, Mike and I are in our thirties and this was an expensive bar, not a place underage kids would try to score a drink, so we were taken back. The bartender said we had to show another photo ID to verify ourselves. All I had was my Sam’s Membership card with its grainy black and white dot matrix photo, and Mike had nothing. Finally a manager came over, deeply studied our IDs under multiple lighting, and begrudgingly agreed to serve us. So word of the wise, if you want a drink in the suburbs of philly, come with multiple forms of photo identification.

Alcohol quickly turned the moment with the bartender into a source of amusement, rather than a frustrating encounter. Mike’s brother-in-law ordered a scotch and received the equivalent of a triple pour. Seriously, we barely get a beer, but he got a pour like the liquor was expiring in an hour.  As it was much more scotch than he was intending or wanted, he offered to share. Mike and his sister, both of Irish descent, refused as they are bourbon drinkers. I had never had scotch, but I didn’t want to appear ungrateful to my hosts, so I agreed to help out. I am of Scottish descent, and my genes instantly delighted as the leathery flavor hit my tongue. His brother-in-law, excited to have another scotch fan on his side, gave me a full tasting of all different brands of scotch once back home. I landed on Laphroaig Select as my favorite.

The next morning I awoke somehow hangover free despite the array of scotch I had tried. Mike had volunteered to stay home and watch the kids, so he slept in while the 3 of us started an early morning journey to the heart of Philly. The port-a-potty line was impossibly long and we were nearing the start time, I decided to skip it and we moved into the starting corral. Both Mike’s sister and brother-in-law are fast runners, much faster than I am. They decided to stay with me though as I aimed to try for a sub-2, a feat I had never completed. 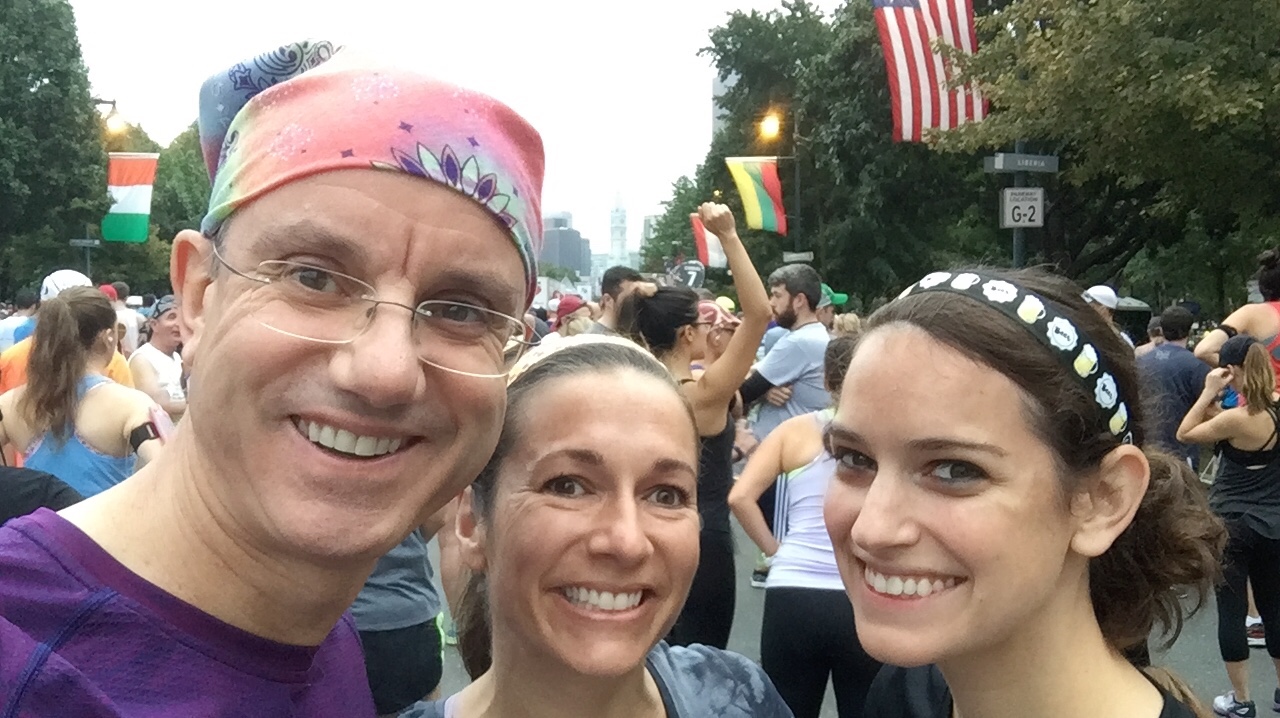 The race started well enough, and we were keeping a good pace. The course winded through downtown Philadelphia, and was relatively flat. I had grabbed a granola bar for breakfast which I ate during the car ride, but I had not brought any extra fuel. I knew they would be handing out Sport Beans, but I realized too late I was on the wrong side of the street to grab the Sports Beans as we passed. Not wanting to waste time backtracking, I just pushed forward. Little did I know that was the one and only fuel station on the course.

The bands and crowd support, such as the man dressed as a superhero standing in the middle of the course giving out high-fives and dancing, keep me both motivated and mentally engaged. There was also a homeless man standing on the side of the course asking the runners for change. I can’t imagine he made very much as I do not know a single runner who keeps a pocket of change on them while distance running. Around mile 11 my energy levels were depleting and my skipped pre-race pee was coming back to haunt me. I really wanted to stop and walk. We told Mike’s sister to keep her amazing pace, but Mike’s brother-in-law stayed with me as my pace slowed, gently and effectively pushing me forward. He reminded me my breathing was still perfect so I was still physically able to maintain a good pace, I just had to overcome the mental aspect. That and the fact that the faster I finished, the sooner I could use the bathroom. 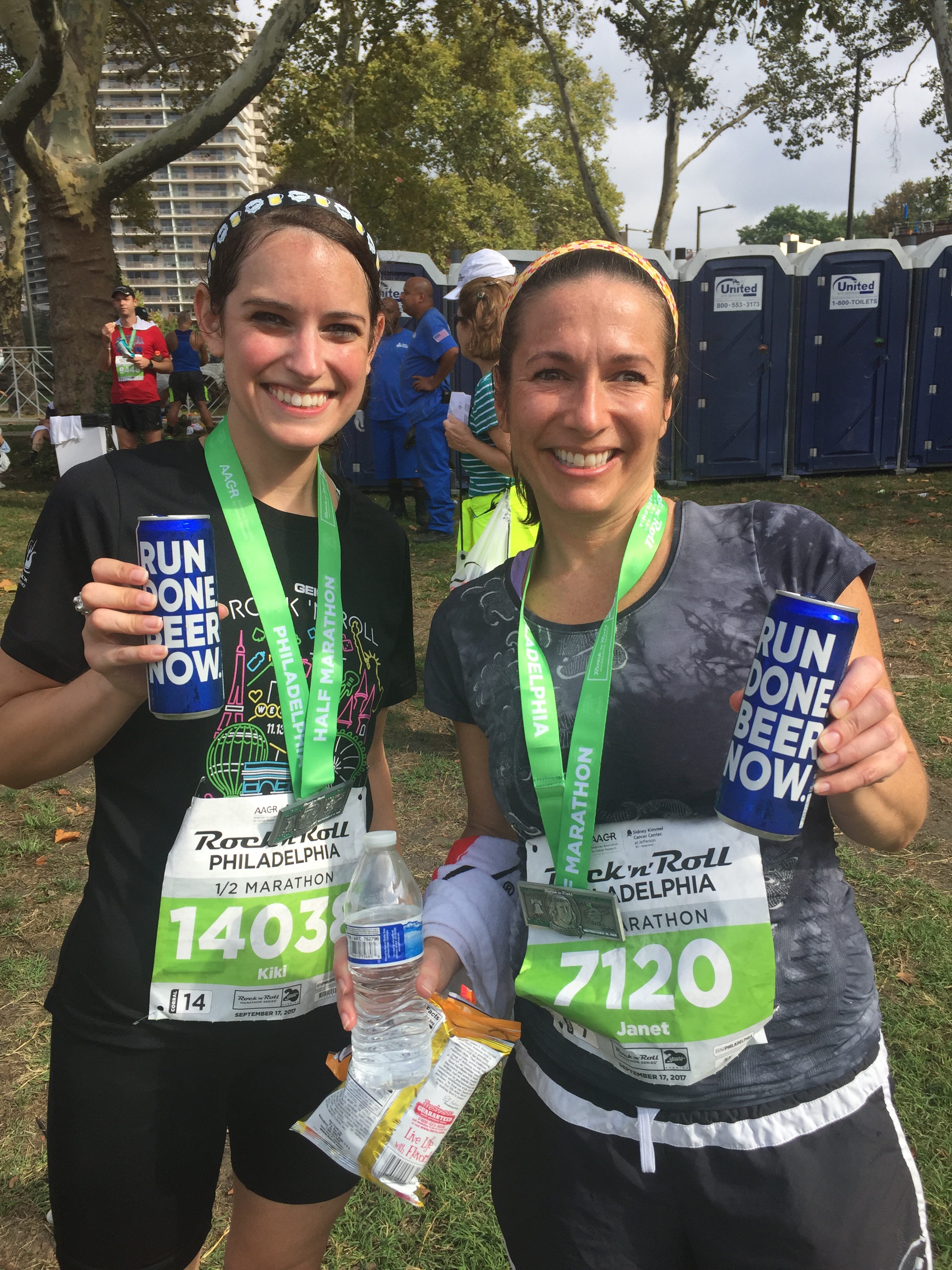 I pushed through and when we crossed the finish line the gun clock showed a time slightly over 2 hours. I had given up on the hope of hitting a sub-2 when my energy faded and my bladder filled. Michael’s sister came running over and informed me of my official chip time. 100% thanks to Mike’s brother-in-law, I finished the race in 1:59:54. Six whole seconds under 2 hours. I know that isn’t the most impressive sub-2, but for me it meant the world. I will openly admit I teared up when I learned the news. I was so excited I even paid the $20 to have my medal engraved. A sub-2 was a bucket list item and I needed to commemorate it, even if it was just 6 seconds under.

For me this was an epic trip where I not only accomplished a life goal, I obtained the half marathon ritual I still follow of enjoying a Scotch on the rocks the night before a race. Even Mike, who doesn’t sugarcoat when he is unhappy, said he enjoyed the trip. Thank goodness we had that concert planned or I think his assessment wouldn’t have been so positive. I wish this story had unfolded without Mike being in pain, but life rarely goes as planned. I’m just hoping the thrown out back isn’t a reoccurring theme and this is a one-time story line. Fingers crossed!