In 2008, I looked in the mirror and finally noticed the over 200 pound version of myself I had become. More importantly, I was motivated to do something about it. I started with simple changes to my diet and walking around the neighborhood. As I lost weight, I was inspired to keep cleaning up my eating, walking longer, and incorporating some jogging. After a year or so, I was down to 125 pounds, and was running up to 6 miles a day. 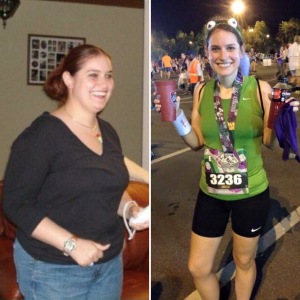 However, I had never done a race. It seemed dumb to spend money to run when I was doing it for free most days. I really didn’t understand the appeal. So for years I just ran for fitness and pleasure. In 2013 I started coaching Girls on the Run. The season ends with a 5k, untimed since the goal of Girls on the Run is to foster self-respect and pride through running. The whole atmosphere of the race was new to me. Pre-race there was music and dancing. The excitement in the air was contagious. Although the race was uncompetitive and I was running to support my girls, I still sensed the drive to push yourself a race gives you. It inspired me to sign up for a competitive 5k.

NoDa 5k 2014 was the race I picked, mainly for the appeal of a free beer since it was located at the NoDa Brewery. I had so much fun running that race, I started signing up for more races. That led me down the rabbit hole and 5ks turned to 10ks, 10ks turned to half marathons, and now I’m training for a full.

Although I rarely run 5ks anymore, I still return to the NoDa 5k yearly. I have run it every year since 2014, except 2020 when it was cancelled. The race always starts at 6 PM, and is typically held in early June. As you can surmise, it is a hot race. This year they moved it to late July, when the heat is even worse. This is never a race I aim to PR due to the race conditions. As expected, race day was steamy with the peak being 90 degrees. To make it more fun, the course is hilly, with constant ups and downs. Thankfully there was cloud coverage and a slight breeze, which helped us from melting into the asphalt. 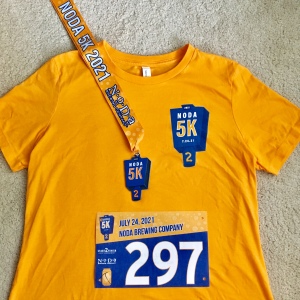 We lined up at the start, and took off. I pushed myself but never looked at my watch to monitor my pace. I only had a goal to finish in under 30 minutes, but if I missed that goal I wouldn’t be upset. Once I crossed the finish line I checked my Garmin and saw I had finished in 28:14. I grabbed a Powerade popsicle, which tasted magical after a hot run, and met back up with my friends to watch the others in our group cross the finish line. Once everyone had finished, we grabbed our free beer and found some shade to relax in.

Due to Covid safety measures, they no longer had a results tent. You checked the results on your phone. My boyfriend wanted to see if he had made his goal time, so he checked his results, then mine. “Hey, you are second in your age group”, he exclaimed. “That is impossible”, I replied. The NoDa 5k usually has close to 1,000 people, with some very fast runners since the NoDa Brewery hosts a weekly run club. This year, whether due to the pandemic or being moved to July, not even 250 people had shown up. My odds of placing were better, but I still didn’t believe it. It was a bucket list item to place in my age group during a race, but I had never succeeded. “We will see if my name is called during the awards,” I retorted. Sure enough, during the awards ceremony my name was called. 2nd place is the 35-39 age group. I won a NoDa 5k themed medal koozie, which I accepted with a huge smile on my face.

I know for a lot of runners placing is commonplace and unimpressive. For me, this was a life goal I honestly never expected to meet. I had tried in the past to place at various races, with much faster times, and never got close. This race I wasn’t even hoping to win, and I finally did it. I know it is just luck that faster runners didn’t show up, but everyone had the chance to sign up. Out of the 14 people in my age group who did, I was the 2nd fastest. I’m not boosting I had some Olympic pace. Heck, it isn’t even my 5k PR. I did give it my all though, and I won fair and square out of the competition this year. Plus how fitting that I’d achieve my goal at the NoDa 5k, a race I have so much history running. I’ve been using my koozie everyday, a little reminder of how far I’ve come since 2008, and that I shouldn’t give up on my goals. All goals can be reached in time, some just take longer to obtain. The only way to fail is to stop trying. Take Journey’s advice, don’t stop believin’.

I have been a bad blogger and I’m way behind on half marathon recaps. I hope to get back on track soon. I recently started a new run club for a local arcade bar, Abari, so a lot of my time and energy has been focused on getting that going. (If you live in, or are visiting, Charlotte, NC feel free to come run with us! Abari Track Club) Now that I have that fairly under control, I can get back to blogging.

One of my New Year’s resolutions was to PR in a 5k, so when I discovered a Friday night race just down the road from my neighborhood I figured I couldn’t pass it up. The Freemorewest 5k on the Greenway only cost $25, came with a t-shirt, plus a free pint of craft beer from Town Brewing. Free beer is all I need to convince me to run, so I asked my friend Becky to join me and signed up.

If you don’t live in NC, you may not know we turned into a rainforest. It rained almost daily over winter, and it seems spring is following suit. So I wasn’t surprising when it stormed the afternoon of the race. Thankfully it slowed as the day progressed, but the threat of an evening thunderstorm loomed. I had already decided I was going to run rain or shine, but with the uncertain weather, Becky decided to back out.

I had looked up the finish time for this race last year, and based on those times I had a chance to place in my age group. In the start corral they told us that the course was slightly re-routed due to flooding on the greenway, which is common for Charlotte greenways as they tend to parallel creeks. It had been lightly raining before the race, but minutes before the race started it stopped. However, that just left the air loaded with humidity, so I think I would have preferred a drizzle.

After the start horn, people instantly went flying past me. People commonly start too quickly and slow down in the end, so I stayed positive on my goal to place. We crossed some train tracks and a few runners slipped and fell on the wet wood. Then on the greenway there were many slippery mud spots or large puddles covering the entire paved path. The course also hillier than I anticipated. I kept a strong pace, but let myself slow down due to the slick conditions. This race was not worth an injury. I looked at the large number of women still in front of me at mile 2, and mentally let my hopes of placing go.

5ks always feel like they go so fast, and right when I started thinking “I can’t maintain this pace much longer” I looked at my Garmin and saw I only had a ¼ mile left. I crossed the finish line, seeing on the clock that only 26 minutes had passed. My previous PR was 26:50 from the Pancake and Beer 5k, and I knew I had beat that. I walked around the sponsor tables, letting my heart rate stabilize, and printed my official race results. They confirmed I had PR’d. They also confirmed I had not place in my age group, not even close! I came in 11th. Per the 2018 results, I would have come in 3rd with my time, but clearly all the elites were out in force this year. Oh well, part of running is you never know who else is going to show up at a race.

The race ended in the parking lot of Town Brewing, which is where my boyfriend had been waiting for me. I found him at the outside bar, and got in the long line for my free beer. I gave him Becky’s bib so we could get the free beer it came with. (*please note: no one ran with the bib. I do not condone illegal bib transfers or banditing races. I do not have a problem, however, of drinking the free beer that comes with a fully paid race entry. Becky did give us permission to drink her beer.) You could pick any beer you wished, and I got the Naked Napoleon, which was a refreshing sour beer. Once our beers were done we headed home, although they did have live bands and DJs set up for a fun after party. We had prior dinner plans with out-of-town friends though, so I needed to get cleaned up pronto.

Despite my hopes of placing being beyond broken, this was an enjoyable 5k. I did at least PR. With better weather I would have enjoyed it more, but that is not the fault of the race director. For only $25 and a free beer, I’d run it again.